The Super Eagles has had a remarkable outing in September, with a contribution of at least a goal in each of his last five matches

Victor Osimhen revealed that the love he gets from fans and everyone at Napoli inspires him to “fly” for the club whenever he’s called upon.

The 22-year-old made up for his red card in Napoli’s opening game of the season against Venezia, by scoring seven goals in his last five matches for the team.

His tally of four Serie A goals has helped Luciano Spalletti’s men maintain their perfect league start which puts them atop of the table with 18 points after six matches. 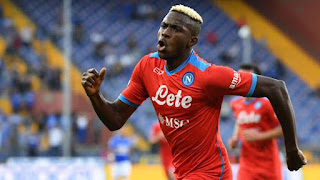