The Bayern Munich defender incurred the wrath of a fellow France international during the Nations League final, but has been talking up his ability

Benjamin Pavard claims to have no issue with Paul Pogba following an on-field rant from the Manchester United star during France’s victory in the UEFA Nations League final, with the pair now friends again after seeing tempers flare in the heat of battle.

A World Cup-winning midfielder lost his cool with an international colleague during a 2-1 win over Spain, with Pogba demanding more from Pavard after being forced to leave his central role to provide cover at right-back.

The issue quickly blew over, as Les Bleus went on to claim the ultimate prize, and apologies were offered afterwards by a 28-year-old who expects nothing but the best from himself and those around him. 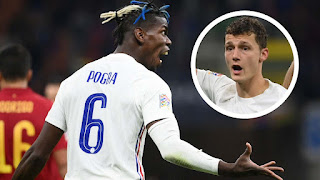