Prince William was pictured speaking to his estranged brother Harry after their grandfather’s funeral as they appeared in public together for the first time in more than a year.

The princes spoke to each other while walking out of St George’s Chapel following the funeral service for Prince Philip this afternoon. They were earlier seen taking part in the funeral procession but walked beside their cousin Peter Phillips. 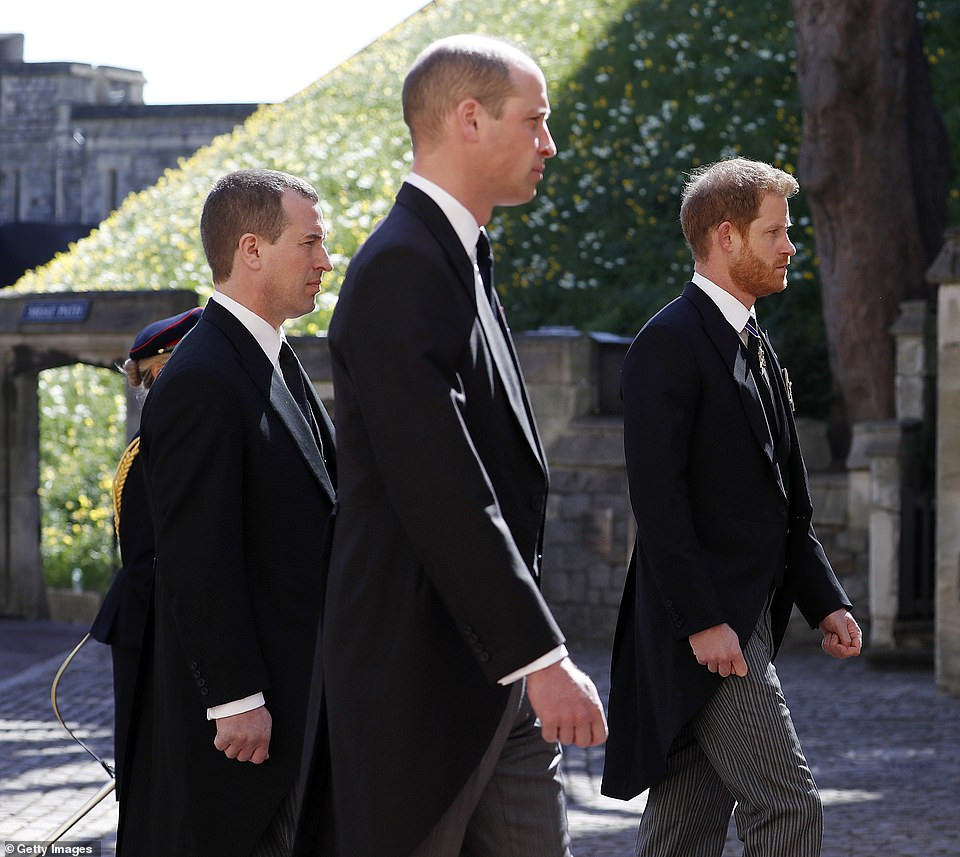 Harry was first spotted speaking to his sister-in-law Kate Middleton as they left the chapel before he spoke his brother William. 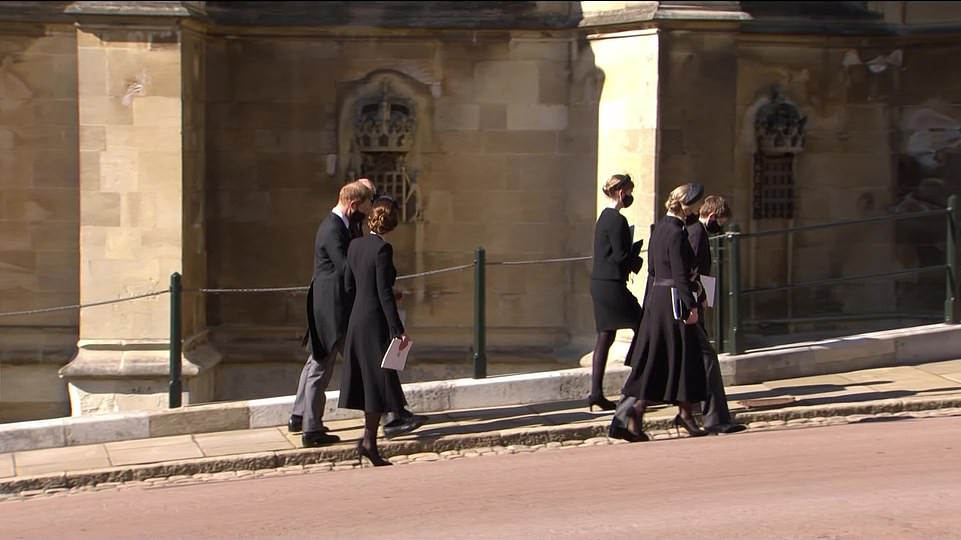 Harry’s friend Tom Bradby, who was presenting ITV’s coverage of the funeral today, said: ‘Funerals are a time of reconciliation and that a sight, let’s be honest, that’s many wanted to see. Not least the family itself.’ 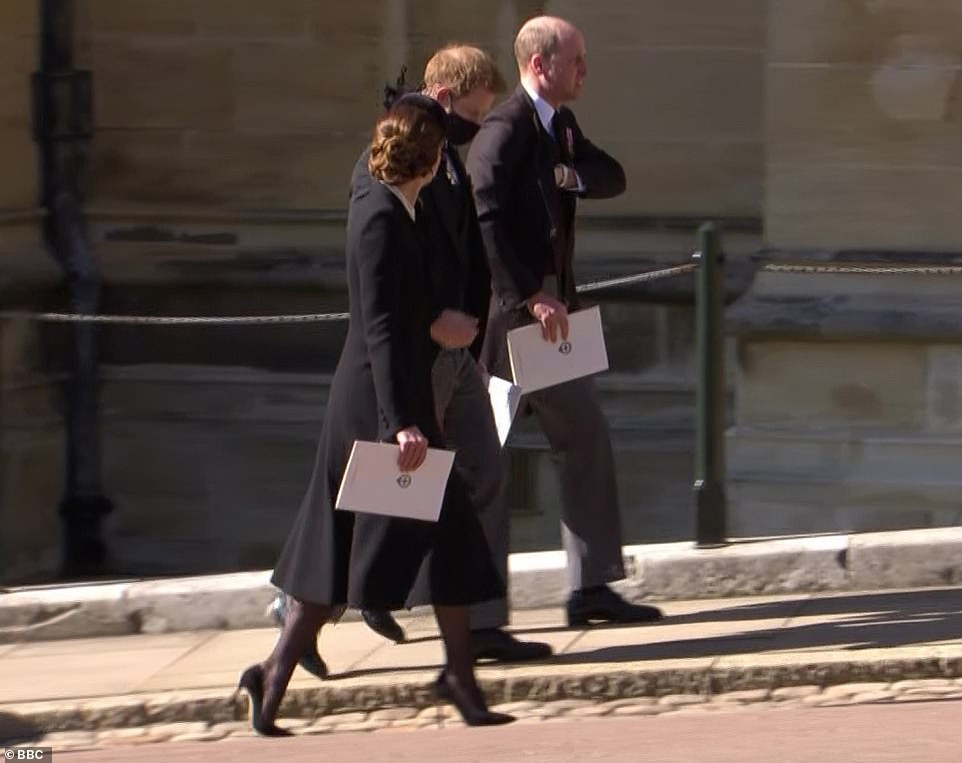 William, 38, and Harry, 36, were among nine members of the Royal Family who walked behind their grandfather’s unique coffin this afternoon, leaving the Sovereign’s entrance at Windsor Castle at precisely 2.45pm. 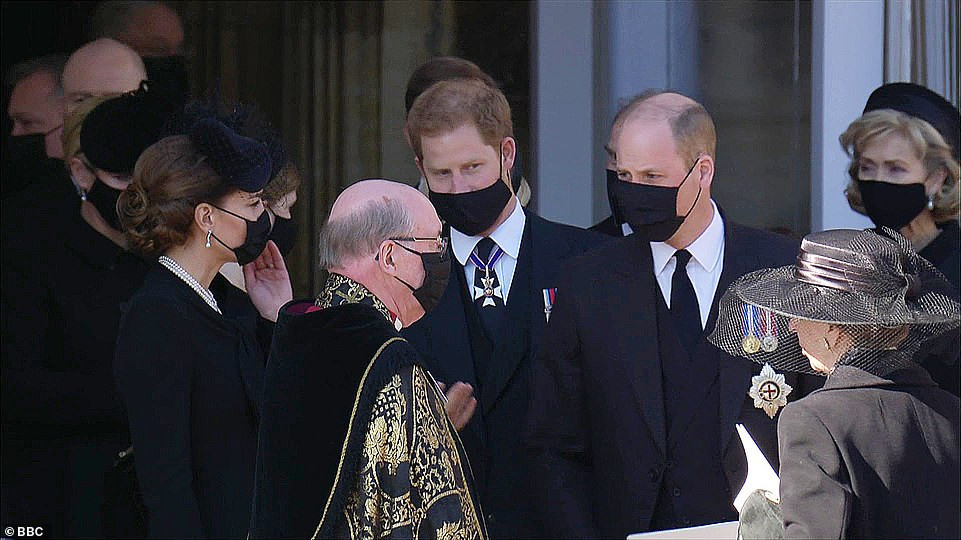 ‘The arrangements have been agreed, and they represent Her Majesty’s wishes, so we’re not going to say anything more on that.’ 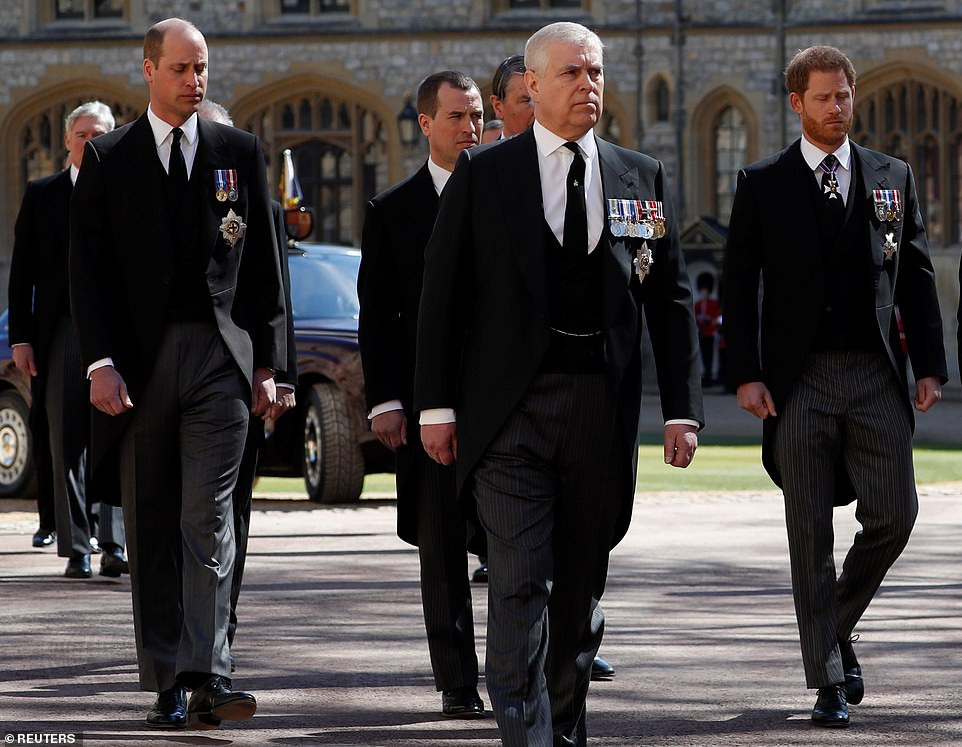 Sources admit that the fraternal feud has taken up ‘much thought and energy’ in the Lord Chamberlain’s Office, which was responsible for today’s arrangements.

‘Everyone is walking on eggshells so as not to exacerbate the situation,’ said one.

‘To be fair, both William and Harry have made clear that they wish to focus on mourning their grandfather and do not want anything to get in the way of that.

‘But it has made everyone doubly nervous about saying anything that could be remotely construed of being critical of the other side. It’s been a minefield.’

Sources insist the formation of those walking behind the coffin was based on ‘bloodlines and age’.

Today marks the first time the brothers have been seen together since March 2020, when they attended a Commonwealth Service at Westminster Abbey with other royals and could barely look each other in the eye.

Their appearance together also comes after Meghan and Harry’s bombshell interview with Oprah Winfrey – in which he claimed his older brother was ‘trapped’ inside the Monarchy.

Speaking about the brothers’ conversation today, body language expert Judi James told MailOnline: ‘The moment of connection between William and Harry came right at the end of the service as they left the chapel.

‘In a well-co-ordinated but also relatively natural-looking moment, Harry walked up behind William and Kate to then join them, walking between them and chatting to them both. After a few seconds of what looked like natural and not self-conscious conversation, Kate fell back, leaving the two brothers walking off talking alone. It looked like a genuine moment of unity rather than something contrived for the cameras.’