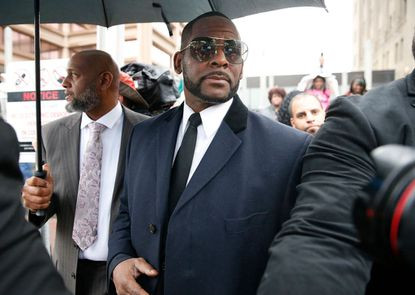 Grammy award winning singer, R.Kelly allegedly forced his girlfriend’s to watch him play basketball and ordered them not to look at his teammates or opponents, accusers and former employees have told a court hearing.

The accusations heard by the jury in Brooklyn Federal Court on Monday, September 13, show how the R&B singer allegedly exerted complete control over his girlfriends.

One of Kelly’s assistants, Suzette Mayweather, sat with his girlfriends at the games, and testified in court saying;

When a stray ball came toward the girls and young women, they’d go quiet if another player approached, recalled another Kelly employee.

“They would cross they legs and look at the ceiling or the wall,” said Darrick Stephens, Kelly’s former business manager.

“If we looked at other men we’d get a chastisement,” testified Jane, one of Kelly’s accusers who said she attended his nightly basketball games while dating him from 2015 to 2019.

Kelly, 54, used harsh spankings on his women as chastisements, which he allegedly gave to girlfriends if they disobeyed him. The prosecution say Kelly spanked his girlfriends, beat one with a shoe and others with a cord and sometimes dragged them by their hair, if they ever disobeyed him..

Jane testified that she would look for Kelly’s shoes on the court and then look up to see him playing.

One of Kelly’s male accusers, known as Louis, said he was invited to play with Kelly at a field house in Markham, Ill., outside of Chicago.

He quickly noticed the singer’s girlfriends sitting in the bleachers, “kinda like facing the wall” and wearing “baggy clothes.”

R. Kelly, even had an employee whose main job responsibility was to organize games and maintain a list of people to call to hoop.

Kelly also allegedly ordered players who joined his games to always give him the ball, Demetrius Smith, Kelly’s tour manager in the 80s and 90s, once told the Daily News.

“When Robert plays, he has to have the ball. Everybody gotta pass him the ball. He plays like Michael [Jordan],” Smith said.