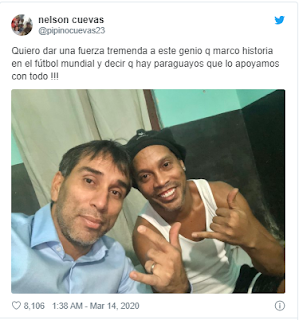 A friend of Ronaldinho has explained the Brazilian legend is “sad” while serving his term in jail.

Former River Plate striker Nelson Cuevas visited the 39-year-old who is currently behind bars for allegedly attempting to enter Paraguay with a fake passport.

He explained that although the World Cup winner is in a well-maintained area of the prison, he’s currently not acting like his usual self.

Cuevas told Argentinian publication Infobae about his recent visit: “He is sad. Hopefully, he can get out soon.

“He is just sad because of the situation. His lawyers are handling the rest. I hope he can get out of there soon.”

Ronaldinho is currently jailed alongside brother Roberto de Assis and the duo are located in a specialised unit.

Cuevas did agree that the former Ballon d’Or winner is having a relatively comfortable time relative to other inmates.

“In comparison to other penitentiaries, yes,” the former Paraguay international explained.

“But it’s not what he’s used to. The place is big and he was able to play football too. He is with his brother in a room with two beds.”

Ronaldinho has been warned that he could face up to six months behind bars following his arrest two weeks ago.

One way he’ll be able to pass the time is taking part in more futsal games and completely running the show.

The prison are currently hosting their biannual futsal tournament and although he’s not featured in the full tournament, Ronaldinho got involved in a game over the weekend.

He was invited to play a game by other inmates at Agrupacion Especializada, scoring five and assisting six in an 11-2 win.

It’s safe to say that the captains in the tournament will be glad to not come up against Ronnie.

Football postponed everywhere but Ronaldinho is playing while in jail in Paraguay. This should be live on Sky & BT.#Brazil ⚽️?pic.twitter.com/j66t6IBtjZ