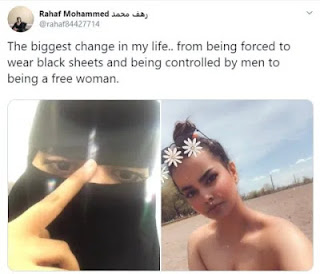 A young woman has received a barrage of abuse after she showed before and after pictures as she celebrates her new life in Canada following her escape from Saudi Arabia.

Rahaf Mohammed al-Qunun posed in a bikini and compared it to an old image of herself in a niqab.

She said it was ‘the biggest change in my life.. from being forced to wear black sheets and being controlled by men to being a free woman’.

Critics in Saudi Arabia were quick to hit out at her, saying that she was making herself ‘naked’.

But, she has also received a large amount of support with people saying she was incredibly brave and that she looked amazing.

Qunun fled the kingdom in January last year and barricaded herself in her hotel, saying she was escaping abuse from her family.

For Saudi women, running away can be a matter of life and death, and they are almost always doing so to escape male relatives.

Following the recent pictures, one follower told her: ‘I really feel sad for people like you, Saudi woman are living in happiness, they are living a normal live they drive, go malls and now they travel alone, plus our prophet Muhammad said that women and men are equal.’

Another said: ‘I was checking her previous posts and got to know that she literally got all this fame because she threw hijab away and started clothing like in the second picture.’

Qunun escaped her family while they were visiting Kuwait then flew to Bangkok. She was denied entry by immigration police and her passport was seized.

She then took her case to social media, sparking the hashtag #SaveRahaf, and posted video of herself using a table to block the door to her hotel room.

She renounced Islam and declared herself an atheist, saying: ‘Physical, emotional and verbal abuse and being imprisoned inside the house for months.

‘They threaten to kill me and prevent me from continuing my education. They won’t let me drive or travel. I am oppressed.

‘I love life and work and I am very ambitious but my family is preventing me from living.’

As a result of her campaign she was given UN protection and she chose to fly to Canada after being granted asylum there.

Rahaf thanked her followers for their ongoing support, writing: ‘I would like to thank you people for supporting me and saving my life.

‘Truly I have never dreamed of this love and support. You are the spark that would motivate me to be a better person.’ 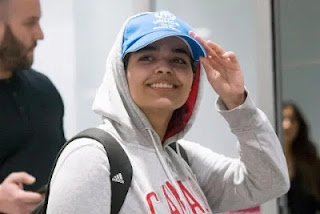