Skip to content
A Nigerian polytechnic in Owerri the Imo state capital has been named as the best Polytechnic in Nigeria. 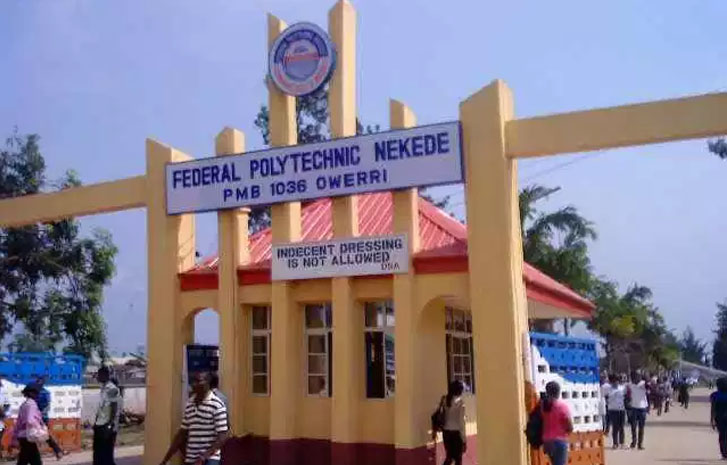 Federal Polytechnic Nekede, Owerri
The Federal Polytechnic Nekede, Owerri in Imo is the best polytechnic in Nigeria, according to the National Board for Technical Education (NBTE).
The Executive Secretary of the Board, Dr Masa’udu Kazaure made this known in Kaduna on Thursday, at the end of the Second Regular Meeting of the NBTE Governing Board. The meeting was chaired by Prof. Modupe Adelabu.
Kazaure explained that the polytechnic emerged the best after scoring 85.08 per cent in the assessment of 112 federal, state and private polytechnics in the country, in the pilot ranking of Nigerian polytechnics.
He said that the exercise covered 2015/2016 and 206/2017 academic sessions.
He said that the Federal Polytechnic Ilaro, Ogun came second with 73.08 per cent, while Kaduna Polytechnic, Kaduna State came third with 72.31 per cent.
Other polytechnics in the top 10 included The Polytechnic Ibadan, Oyo State, ranked fourth with 67.69 per cent; Federal Polytechnic, Bida, Niger, fifth, 65.38 per cent; and Auchi Polytechnic, Auchi, Edo, sixth, with 63.85 per cent.
Institute of Management and Technology (IMT), Enugu, Enugu State, seventh, with 62.31 per cent. Federal Polytechnic Offa, Kwara, Rufus Giwa Polytechnic, Ondo State and Yaba College of Technology, Yaba, Lagos State were ranked eighth with 60.77 per cent.
Federal Polytechnic, Oko, Anambra was ranked 11th with 60.00 per cent and Federal Polytechnic, Idah, Kogi, occupied the 12th position with 59.23 per cent.
The NBTE boss also said that when disaggregated by ownership, the Federal Polytechnic Nekede also emerged the best Federal Polytechnic in the country followed by Federal Polytechnic Ilaro and Kaduna Polytechnic.
“The Polytechnic Ibadan, IMT and Rufus Giwa polytechnics were the highest ranked among state polytechnics, while Lagos City Polytechnic is the highest ranked private polytechnic and the 16th in the country.
“Dorben Polytechnic and Heritage Polytechnic were the second and third best private polytechnic in the country.”
Kazaure explained that the polytechnics were ranked based on total number of programmes with full accreditation in the last two years and percentage of programmes with full accreditation.
“Other criteria include proportion of academic staff showing the right mix, that is, chief lecturer and principal lecturer down to assistant lecturer; and ability of institution to introduce programme in new and emerging fields.
“They were equally assessed based on capacity building of staff both within and outside Nigeria, teaching quality, including staff /student ratio and ratio of full-time to part-time staff.
“Other areas are availability of current Campus Master Plan, Strategic Plan, and Academic Brief; percentage of academic staff with relevant higher qualification and professional registration; and 70:30
technology-non-technology enrolment ratio.
“Another consideration was the incorporation of entrepreneurship education into the institute’s curriculum and fully established Entrepreneurship Development Centre,” he said.
He said other issues discussed by the board borders on quality assurance, accreditation, resource inspection visits and proliferation of illegal technical and health institutions in the country.
He said that 191 out of the 239 programmes in 41 polytechnics visited for accreditation between June and September 2018 were granted full accreditation while 48 got interim accreditation.
He also said that 117 programmes were scrutinised for resource inspection within the same period and 94 programmes were granted interim accreditation to commence operation, while 23 were denied.
“Four proposed private polytechnics were also visited for approval and licensing within the period under review and only one was recommended while three were asked to remedy some identified deficiencies.
“The governing board also approved a memorandum of understanding with Environmental Health Officers Registration Council of Nigeria to reduce the burden of duplication of quality assurance visitation and accreditation activities.
“The board also agreed to hold meetings with relevant stakeholders to put an end to proliferation of illegal technical institutions and unapproved private health institutions operating in the county.
“The board particularly commended the effort of the Kaduna State Commissioner for Health, Dr Paul Dogo for expressing concern to the board on illegal health institutions operating in the state,” he said.
Kazaure added that the board equally frowned at the conversion of colleges of agriculture to polytechnics by some state governments and agreed to take necessary actions to put a stop to the development.
(NAN)