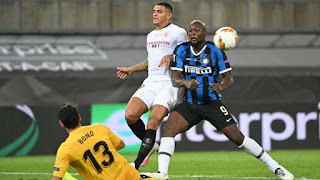 A year ago, the Morocco international produced a standout performance as Julen Lopetegui’s men saw off the Nerazzurri in Cologne

Sevilla goalkeeper Yassine Bounou has chosen his save against Inter Milan striker Romelu Lukaku during the 2019-20 Europa League final as the best in his career so far.

With the score 2-2 at the RheinEnergieStadion, the 30-year-old produced a moment of brilliance to stop Lukaku from beating him for a second time after the Belgian star had earlier converted a penalty in the fifth minute.

The save helped Sevilla from going behind in the encounter as the former Manchester United forward later deflected Diego Carlos’s strike in the 74th minute which turned out to be the match-winning effort.