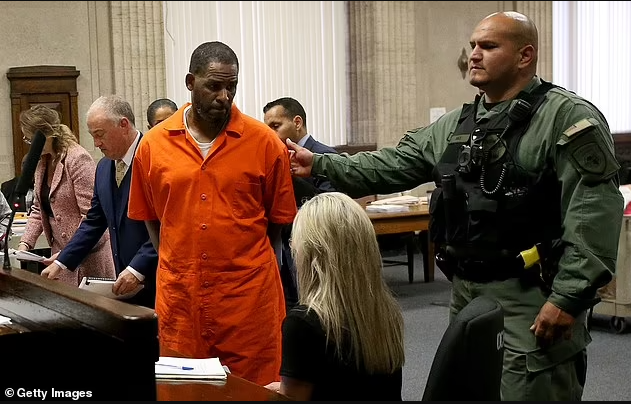 Disgraced R&B singer, R. Kelly told a judge on Wednesday September 22, that he will not testify in his own defense at his federal sex trafficking trial to avoid avoid the risk of a potentially brutal cross-examination.

When asked by the judge if he understood the implications of his decision, he replied: ‘correct.’ Lawyers had already said Kelly was unlikely to take the witness stand.

During the closing arguments on Wednesday afternoon, a prosecutor told jurors that the government had delivered on its promises to prove that the R&B singer had for years commanded close associates to help him target, groom and exploit girls, boys, and young women for his own sexual gratification.

Assistant US Attorney Elizabeth Geddes insisted that the trial ‘showed he did just that.’

She said that Kelly got away with sexually abusing his victims by surrounding himself with a team which he strictly controlled. She described the assistants, drivers, bodyguards and others Kelly employed as a criminal enterprise that resulted in the federal racketeering charges brought against him.

Jurors could begin deliberating as early as Thursday. Kelly, 54, faces a life sentence, if convicted as charged.

The brief defense case has relied on just a handful of former Kelly employees and other associates who agreed to take the stand over the course of two days to try to discredit allegations that he sexually abused women, girls and boys during a 30-year musical career.

Most of the defense witnesses said they never saw Kelly abuse anyone. One went as far to say Kelly was ‘chivalrous’ to his girlfriends. Another admitted he owed Kelly for his break in music business and wanted to see him beat the case.

The defense’s fifth and final witness, music industry executive Julius Darrington, testified for 15 minutes on Wednesday. He said he spent 10- to 12-hours a day with Kelly ‘every day, almost,’ from 2016 until 2019, when Kelly was taken into custody.

Darrington said he never saw women being locked in rooms, heard screaming or crying, or saw Kelly strike anyone, which other witnesses have said took place.

On cross-examination, prosecutor Elizabeth Geddes tried to emphasize how Darrington was not monitoring Kelly around the clock.

‘You have no knowledge of what the defendant did behind closed doors when you weren’t there, correct?’ she asked. ‘Correct,’ Darrington responded.

Hood began by claiming that he never saw Kelly engaging with underage girls but then admitted that he was present when the musician met Aaliyah for the first time.

Aaliyah is the youngest of Kelly’s alleged victims. She is believed to be 13 or 14 when Kelly began having sex with her in 1993 and 15 when he forged documents to marry her illegally.

He testified that he never witnessed Kelly acting inappropriately.  ‘As a police officer, I would have had to take action against that,’ Hood said. ‘I never had to take any action. I was never made aware of any wrongdoing.’

But he later shared that Kelly surrounded himself with girls specifically mentioning ‘little Aaliyah’s little hype girls’ saying ‘I wasn’t checking IDs at the studio.’

He claimed that it was ‘later in life’ that he learned of Kelly’s illegal marriage to the underage girl.

The defense also called Dhanai Ramnanan to the stand. Ramnanan testified that Kelly was ‘like a mentor to me and a good friend.’ The aspiring musician said he worked with Kelly for 15 years sporadically and never witnessed Kelly mistreating women.

‘Whenever we’d go to a restaurant, they’d sit down first, they’d order first, they got to eat first,’ he said Kelly’s girlfriends. ‘I mean, chivalry, basically.’

He insisted that he did not ever witness Kelly verbally or physically abuse women, or prohibit them from eating or using the restroom all of which he has been accused of during the trial.

By contrast, prosecutors have called 45 witnesses since the trial began in federal court in Brooklyn on August 18. They included several female and two male accusers to back up allegations that Kelly used a cadre of managers, bodyguards and assistants to systematically recruit potential victims at his shows, malls and fast-food restaurants where he hung out.

The accusers testified that once they were in Kelly’s orbit, he groomed them for unwanted sex and psychological torment – mostly when they were teenagers – in episodes dating to the 1990s.

The accusers’ searing accounts were supported at least in part by other former Kelly employees whose own testimony suggested they were essentially paid off to look the other way or enable the recording artist.

The defendant, born Robert Sylvester Kelly, has pleaded not guilty to racketeering charges.

He’s also charged with that multiple violations of the Mann Act, an interstate anti-sex trafficking law which makes it illegal to transport anyone across state lines ‘for any immoral purpose.’

Kelly has also been accused of knowingly spreading herpes to several of his victims, which is a crime in some states.

He has vehemently denied the allegations, claiming that the accusers were groupies who wanted to take advantage of his fame and fortune until the #MeToo movement turned them against him.

Despite decades of sexual misconduct accusations, the New York case is only the second to result in a criminal trial. He was previously acquitted of a child pornography charge.