Two internet fraudsters popularly known as yahoo boys who were smiling in their mugshot, have bagged jail sentences after being arraigned in court.

John Padre Akor and Aondoaver Aondoseer were handed the jail sentence on Thursday July 8 after being arraigned before Justice Abdu Dogo of the Federal High Court sitting in Makurdi, Benue State by the Economic and Financial Crimes Commission( EFCC) on one-count separate charge bordering on criminal impersonation and obtaining money from foreign nationals under false pretence.

Justice Dogo convicted and sentenced the defendants accordingly after they pleaded guilty to the charge. 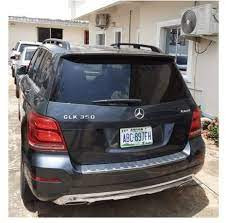 Akor was sentenced to three (3) years imprisonment with an option of fine of N1.5million. A 2015 model GLK 350 4matic Mercedes Benz and a Phone recovered from him and believed to be proceeds of crime were ordered forfeited to the Federal Government of Nigeria.

Aondoseer on the other hand, was sentenced to two (2) years imprisonment with an option of fine of N1 Million. His phones were forfeited to the Federal Government of Nigeria.