The Belgian midfielder can appreciate why his team-mate is feeling frustrated, but is hoping to see him stick around at the Etihad Stadium

Kevin De Bruyne can appreciate why Raheem Sterling may be asking questions of his future at Manchester City, but the Belgian midfielder has urged his team-mate to accept rotation and see the bigger picture.

Speculation regarding a move away from the Etihad Stadium for Sterling is starting to build heading towards the winter transfer window, with starting berths under Pep Guardiola proving hard to come by.

The England international has admitted that, amid talk of interest from Barcelona, he may be tempted to take on a new challenge outside of the Premier League, but De Bruyne is hoping to see the 26-year-old stay put. 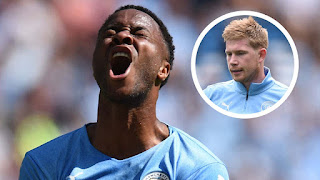