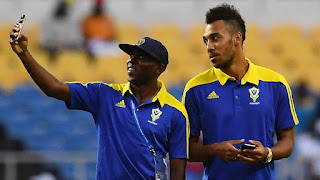 Gabon have shared with GOAL some of the reactions within the team following their bombshell that they would be unable to use Pierre-Emerick Aubameyang for Friday’s 1-1 Africa Cup of Nations draw with Ghana.

Having recovered from Covid-19, the Arsenal striker was expected to return to action against the Black Stars—the news was confirmed to GOAL earlier this week—only for Auba to be absent from the Panthers’ teamsheet at the Stade Ahmadou Ahidjo.

Initial reports from the Gabon Football Federation that the forward was suffering from ‘cardiac lesions’ were later clarified by head coach Patrice Neveu, who outlined that Aubameyang has no cardiac issues, but that there might be Covid-19 residue still left in his system as he continues his recovery from the virus.