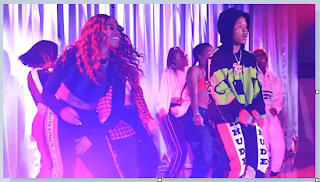 2020 is already turning out to be a great year for two of Africa’s biggest recording artists, Tiwa Savage and Nasty C.

The two made history as they performed at the Universal Music Group’s Sir Lucian Grainge’s 2020 Artist Showcase in Los Angeles on Saturday ahead of the Grammy Awards.

They performed alongside the likes of Billie Eilish, who also made history at the 2020 Grammy Awards scooping 5 awards, and the “Before You Go” artist, Lewis Capaldi.

The showcase is done to highlight some of the hottest established and breaking talents in the industry.

The showcase was attended by some of the music industries leaders like Lana Del Rey, Mandy Moore, Howie Mandel, Jessie Reyez, Adam Horovitz aka “Ad-Rock”, Lulu Kennedy-Cairns, Lang Lang, Lele Pons among others.

Nigeria’s Queen of Afrobeats, Tiwa Savage and South African rapper, Nasty C are set to release priority albums globally through UMG in 2020 and seem ready to shine a spotlight on African music around the world in the coming year.

He is seen pictured with Grainge and artists like Lionel Richie and Justin Bieber.

On his Instagram Nasty C thanked and congratulated Grainge for the opportunity.