Fikayo Tomori impressed AC Milan manager Stefano Pioli in his debut for the Serie A giants, despite ending up on the losing side of a full-blooded derby clash with Inter.

Just four days after completing his move from Chelsea, Tomori was given a baptism of fire as he stepped into a Coppa Italia quarter-final which will live long in the memory at San Siro.

After coming off the bench for the injured Simon Kjaer, Tomori saw Zlatan Ibrahimovic open the scoring before clashing with Romelu 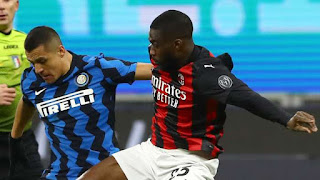