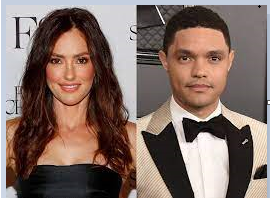 Eight months after news of their romance first hit the headlines, SA comedian Trevor Noah and his bae Minka Kelly have reportedly called it quits.

The Daily Show host and Minka were romantically linked in September last year when an E! News source claimed the pair had been dating for “several months” and had been living together in New York for a while.

However, several reports over the weekend claim the couple have broken up, with an Entertainment Tonight source claiming “their work commitments and careers are very different and they both felt like they should take time apart”.

Minka is known for her role in the hit drama series Saturday Night Lights and in Parenthood, Charlie’s Angels and Almost Human.

The couple were reportedly set to move in together when Trevor bought a $27.5m (about R389m) contemporary mansion in Bel-Air at the start of the year.

Trevor broke up with US real estate agent Jordyn Taylor in 2019  after several years of dating. Jordyn confirmed the split in a Q&A session with fans on Instagram Live.

When asked if she loved Trevor, she responded: “Of course I love him. How could you not love him? I love him so much but you guys should know we broke up this past summer, but yeah I love him.”

Trevor spoke about marriage and cohabiting last year, telling The Howard Stern Show he is an advocate of not living together, even if you are married.

“I’m a big advocate for not living together ever, even if you’re in a marriage. I think one of the biggest reasons people get divorced and relationships break up is caused by this cohabiting bull**** that people believe is the way relationships are supposed to be.”

He said he doesn’t believe in openly displaying his bae and prefers to keep his love life private.