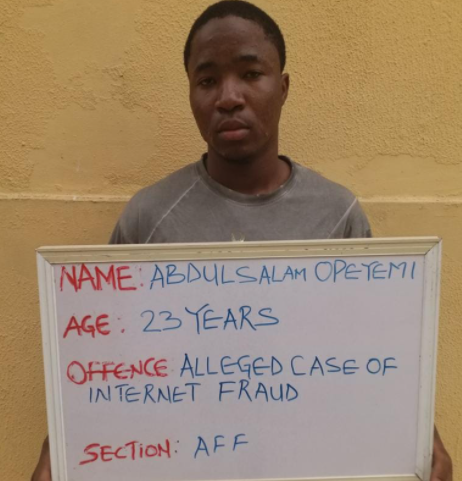 Justice Mahmood Abdulgafarof a Kwara State High Court has sentenced an undergraduate, Abdulsalam Oyeyemi to one year in prison for impersonating an American military officer to defraud members of the public.

The Ilorin Zonal office of the Economic and Financial Crimes Commission (EFCC) had on July 29, 2021 arraigned Oyeyemi, 23, on a one-count charge bordering on impersonation and internet scam.

Absulsalam pleaded guilty to the charge.

Counsel to the EFCC, Aliyu Adebayo, led an operative of the commission to review the facts of the case. In the process, incriminating materials found on the defendant upon arrest were tendered and admitted in evidence. These include the defendant’s extra judicial statements, fraudulent messages printed out of his phones and the manager’s cheque (bank draft) of N200, 000, which he raised as restitution to the victim.

Delivering judgment in the case, Justice Abdulgafar said the court carefully considered the case of the prosecution, the plea of guilt entered by the defendant, his extrajudicial statements and the exhibits tendered before the court, and found merit in it.

Justice Abdulgafar thereafter sentenced Oyeyemi to one year in prison at Mandala Correctional Centre in Ilorin. He ordered that the sentencing be suspended for one year.

The judge also ordered the forfeiture of the convict’s iPhone and the Manager’s cheque of N200,000 which he raised as restitution to the Federal Government.

”The sentence is without option of fine”, the judge added.