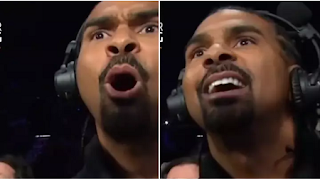 Haye, who was part of the commentary team, was watching in awe of Fury’s showing as he dropped Wilder before securing a stoppage victory in the seventh round.

The video also shows ‘The Hayemaker’ smiling uncontrollably as he applauded the Gypsy King’s incredible work inside the ring.

A brilliant reaction from Haye who once called Fury a rival after they were paired to fight in 2013 until injury forced him out.

“I don’t know what it looked like to everyone at home, but watching it here, I witnessed greatness. That’s what that was,” he said.

“That kind of pressure is hard to negate,” Haye explained. “He’s coming out, he’s coming back in and look at Wilder; his legs are straight and that’s what happens when you don’t have quads to hold your weight a little lower, to ride the shots. But he’s never needed to do it because he punches so hard.

“Fury was so calculated in every department and as you can see, I’m pretty impressed [laughs].”

Fury and Wilder, meanwhile, will meet for a third time after the American exercised the contracted rematch clause.

In awe of the Gypsy King ?