Senate Majority leader Mitch McConnel has announced next week Tuesday as the start date for Trump’s impeachment trial in the Senate, after House Speaker Nancy Pelosi on Tuesday said she plans to hold a vote on impeachment managers on Wednesday so that the House could send the impeachment articles over to the Senate. 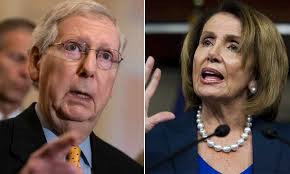 House Speaker Nancy Pelosi, who started impeachment proceedings against US president Donald Trump last year for allegedly withholding financial military aid to Ukraine in exchange for investigating political rival Joe Biden, attempted to withhold impeachment articles from being sent to the senate until she received assurances that the process will be ‘fair’, but her hopes backfired, and she now faces a race against time to finish up impeachment proceedings against Trump before the important Democratic presidential primaries start in full swing next month.

Pelosi on Tuesday confirmed that the vote on the impeachment managers will be held Wednesday, according to a statement she released this morning.

“The American people deserve the truth, and the Constitution demands a trial. The House will now proceed with a vote on transmitting the articles of impeachment and naming impeachment managers on Wednesday, January 15,” Pelosi said in the statement.

Pelosi added: “The President and the Senators will be held accountable.”

In another news, House Republican leadership criticized House Speaker Nancy Pelosi for the delay in transmitting articles of impeachment saying her actions will only hurt Democratic Party presidential candidates who are also Senators.

The GOP leadership held their weekly press conference this morning, and House GOP leader Kevin McCarthy said “there was nothing gained” by holding the articles.

“Obviously, after saying for months that it was urgent that President Trump be impeached the Speaker of the House then sat on the articles for many, many weeks,”

Rep. Liz Cheney also said; “Unclear exactly what she believes she accomplished by it. We seem to be in exactly the same situation we were in previously except we’ve now had this tremendous delay, which means that important pieces of work like, for example, USMCA, which the House has passed, which we need to have passed in the Senate will not be taken up because the Senate will now be focused on the impeachment trial.”