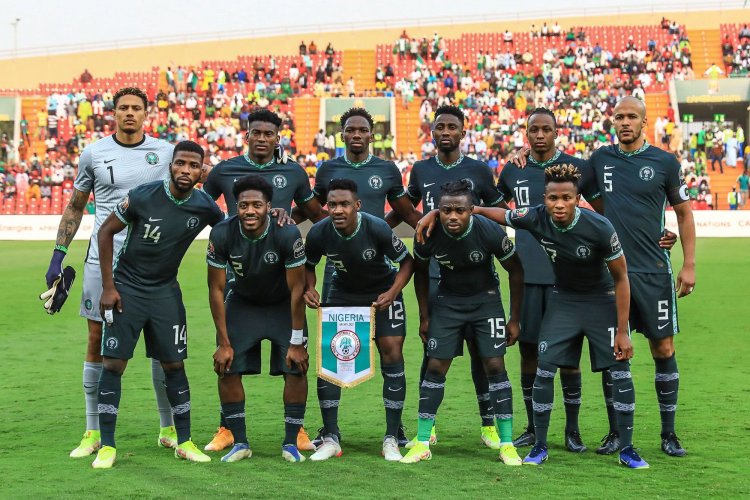 Ghana and Nigeria Friday shared the spoils in the first leg of their final play-off for the Qatar 2022 World Cup following a goalless stalemate at the Baba Yara Stadium, Kumasi.

Expectedly, the 50th game between both countries was explosive as home fans packed the 40,528-capacity stadium cheering their side, who were the underdogs going into this tie.

But the Eagles have goalkeeper Francis Uzoho to thank for keeping them in this tie with his superlative performance against their perennial rivals.

Ghana started the game the brighter of the two sides with Issahaku Fatawu entertaining the home fans with his dribbling skills while AS Roma teenager Afena-Gyan Felix also had an off-target attempt in the third minute of the game.

The Black Stars looked likely to score in the 15th minute with Fatawu through on goal following a fast counter attack, but Leon Balogun’s timely sliding tackle saved the Eagles blushes

The Eagles first attempt on goal came in the 21st minute after left-back Zaidu Sanusi’s dangerous cross was missed by the flying Napoli striker Victor Osimhen.

But the hosts replied six minutes later, as Gideon Mensah almost caught Uzoho napping with a shot from his own half in the 27th minute, but the Omonia Nicosia safe hands parried into safety.

Uzoho was again called into action immediately as Fatawu’s 23-yard scorcher forced a world-class save from the keeper to keep his side in the game.

The Eagles also had their own chances, Osimhen’s 36th minute effort posed no problem for England-born Joseph Wollacott, in goal for the Ghanaians, who had rarely been tested, while Moses Simon’s indecisiveness placed the Eagles on the back foot anytime the Nantes winger had possession.

The Eagles could have taken the lead 10 minutes after the break, but Iheanacho’s close range shot was parried for a corner kick.

Eagles technical adviser Austin Eguavoen introduced fresh legs into the game as he hoped to get a goal bring on Emmanuel Dennis for Samuel Chukwueze in the 59th minute while Frank Onyeka replaced Aribo for extra defensive cover and Oghenekaro Etebo came in for the injured Innocent Bonke.

Ademola Lookman and Calvin Bassey made their Eagles debuts coming on for Simon and Sanusi respectively.

The Eagles saw a 77th minute penalty decision overruled by the Video Assistant Referee after Kelechi Iheanacho was adjudged to have infringed on a Ghana defender, who had handled the ball inside the box.

The second leg comes up at the 60,000-capacity Moshood Abiola National Stadium in Abuja on March 29.