Raphael Varane was forced out of Manchester United’s Champions League clash with Atalanta with an apparent injury.

The French defender was removed in the 38th minute as he pulled up with a non-contact injury.

Varane went straight to the dressing room and was replaced by Mason Greenwood as Ole Gunnar Solskjaer opted to switch Man Utd to a back four after starting with five in defence. 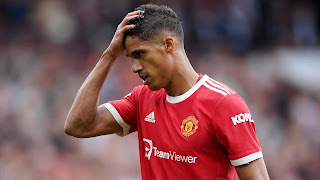