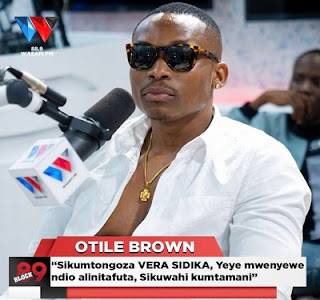 Many have been wondering how Otile Brown and Vera Sidika came to be; and now we know!

Speaking with Wasafi TV just a while ago, Kenyan singer Otile Brown finally opened up about his relationship with Vera Sidika. According to the singer, he never made the first move with Vera Sidika since he had never been interested with her.

“@queenveebosset is my Fri-nemy, I have no problem with her, I was doing well before Vera, People never know I never led her, she was looking for me, She was calling me a lot and I was not receiving”

According to Otile Brown, Vera was the one who reached out to him and after talking for sometime he slowly started developing feeling for the lass.

“”I’ve never longed for @queenveebosset Romantic nor have I ever found her the one she was looking for, I have no reason to cheat, I kept quiet for too long””

Although these two Kenyan celebrities dated for a while on the low before confirming to the public that they were an item; seems like their relationship had already completed the honeymoon phase hence the drama.

It is unclear as to why they continue to talk about each other during interviews since they both moved on and are seeing other people; so could this mean that they miss each other? Well, who knows!