While Chelsea added Romelu Lukaku, the Premier League champions failed to land a centre forward in the transfer window

Pep Guardiola has admitted that Manchester City need a striker after failing to find a replacement for Sergio Aguero in the transfer window.

City spent the summer chasing Harry Kane but couldn’t strike a deal with Tottenham while Cristiano Ronaldo moved to Manchester United after being linked with a late switch to the Etihad Stadium. 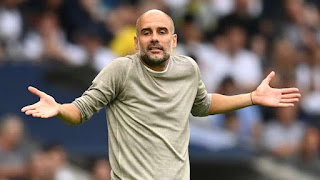