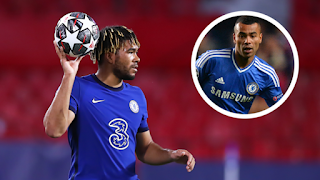 Reece James has revealed that he has weekly briefings with Chelsea and England legend Ashley Cole ahead of his campaign at Euro 2020.

The 21-year-old fullback has been picked in Gareth Southgate’s Three Lions squad and is competing for a starting berth against Croatia on Sunday.

It follows winning the Champions League final and, as a Blues fan growing up, he has spoken about learning from and following in the footsteps of a legendary full-back.