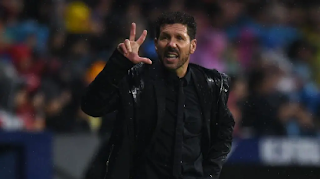 Diego Simeone has revealed how his Atletico Madrid side were able to defeat Manchester United at Old Trafford and book a place in the quarter-finals of this seasonâ€™s Champions League.   Despite Manchester United starting the first half brightly, it was Atletico Madrid who took the lead through Renan Lodiâ€™s first-half header. The first half strike happened to be the gameâ€™s decider, sending United out of the competition in the round of sixteen on a 2-1 aggregate. Speaking to reporters after the game, Simeone explained, â€œIt was a brilliant effort from the lads, one of our best games this season. â€œWe started with a 5-3-2 then changed to a 5-4-1 with Antoine Griezmann on the right of midfield and Renan Lodi growing more and more on the left. â€œThe defence was brilliant and Jan Oblak helped us remain calm throughout. It was a real team effort.â€

You should be ashamed of yourselves â€“ Oâ€™Hara slams Man United fans for throwing...

I donâ€™t know how this man was chosen to be Man United managerâ€™ â€“ Scholes slams...