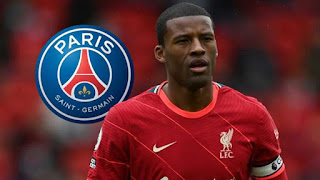 PSG officially announced the signing of Wijnaldum on Thursday, with the midfielder’s move to Parc des Princes set to be finalised when his contract at Liverpool expires at the end of the month.

Barcelona were originally touted as the favourites to land Wijnaldum on a free transfer, but he has ultimately decided to embark on the next stage of his career in Ligue 1, citing Mauricio Pochettino as a major influence.