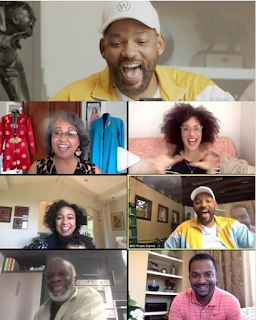 The virtual reunion celebrated 30 years since ‘The Fresh Prince Of Bel-Air’ first aired on TV.

Since the coronavirus lockdown first began, Will Smith has been hosting a show on Snapchat called ‘Will At Home’ and the latest episode saw him reunite his castmates from ‘The Fresh Prince Of Bel-Air’.

DJ Jazzy Jeff revealed he was suffering from coronavirus just a few weeks ago and the cast were pleased to see that he was feeling better now.

After the collective shouted, “He’s alive”, Cartlon Banks actor Alfonso Ribeiro said, “Jeff you had us all scared,” to which the DJ replied, “Not as scared as I was.”

He went on to say, “It was a little rough but I’m definitely happy to be on the other side.”

Originally launching in September 1990 and running all the way until May 1996, ‘The Fresh Prince Of Bel-Air’ became one of the most iconic TV shows of the nineties and helped to launch Will Smith’s career.

The actor/rapper previously caught up with another former ‘Fresh Prince’ star Tyra Bnaks, who played Will’s girlfriend on the show, with the pair reminiscing over a classic scene they appeared in together.

#willsmith reunites #freshprinceofbelair cast for anniversary video chat. They all got emotional