Coach Gernot Rohr has revealed why Odion Ighalo was not included in Nigeria’s squad that tackled Liberia in Saturday’s 2022 Fifa World Cup qualifier in Morocco.

After a two-year absence from the Super Eagles squad, the 2019 Africa Cup of Nations top-scorer was recalled following his impressive goalscoring run with Saudi side Al Shabab.

Despite joining the rest of Rohr’s squad, he was excused from the side that faced Peter Butler’s Lone Star at the Stade Ibn Batouta in Tangier.

Despite his absence, the three-time African champions secured a 2-0 win with penalty goals from Victor Osimhen and Ahmed Musa getting the job done.

Asked why the 32-year-old was not considered for selection during the post-match conference, the German tactician – who expressed his delight about having his star striker back – said: “He [Ighalo] is a good goal scorer, we know it and we are happy to have him back.

“He only arrived on Thursday and that is why he could not participate against Liberia.

“I hope in our next match on Tuesday, he will be able to help us much more.”

The former Gabon and Burkina Faso tactician was also questioned on his motive behind Ighalo’s recall despite the abundance of attacking talent in the Nigeria squad.

“The reason why we asked Ighalo to come back is that we have a young team,” he continued.

“Our strikers are very young 21, 22, and 23 years – [Chidera] Ejuke is very young, [Samuel] Chukwueze is coming back from injury, we need somebody to help them with experience in the attacking position.” 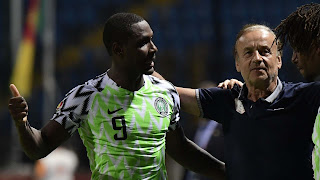